God’s Entrepreneurs: How Irish Missionaries Tried to Change the World

“Today, Humphreys explores a shrinking world… this popular, readable, and brisk overview reminds us of what the missionaries can teach Ireland” John L. Murphy, New York Journal of Books

Who are the Irish missionaries and what has motivated them? Why did people go? For glory, adventure, escape? And what did they achieve?

The author, Irish Times journalist Joe Humphreys, has visited the missionaries’ places of work across the globe, asking what motivated them in the past, and what continues to motivate the modern missionary.

Along the way, we meet women who defied a Catholic Church ban on practising medicine, ‘turbulent’ priests who challenged despots and dictators (and sometimes won), and aid workers, who today fight against such global problems as religious extremism and HIV/AIDS. 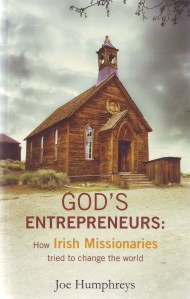 “Joe Humphreys has produced an excellent book, God’s Entrepreneurs, tracing the history and the work of the Irish missionaries. Such a book was long overdue on these selfless ambassadors for Ireland… As Joe Humphreys rightly points out, today’s Irish humanitarian organisations owe much to the example that was set and the trails that were blazed by the missionaries. And Ireland owes much of its reputation for selfless humanitarianism and generosity of spirit to their courage and tenacity.” John O’Shea, founder of development agency Goal

‘…this is a timely book, and one that, being written in very easy-to-read prose, takes the fight right to the enemy. And the enemy is the moronic football fan (ie, the dedicated one)… and indeed everyone who claims that sport builds character.’ Nicholas Lezard’s paperback choice, The Guardian

‘One of the year’s most amusing reads, a carefully controlled rant backed up with well-researched facts.’ Observer

‘impressive… Joe Humphreys writes from a fan’s viewpoint and the moment of clarity that most football supporters eventually have – “What’s the point of all this, why am I letting it affect my life so much?”‘ Metro 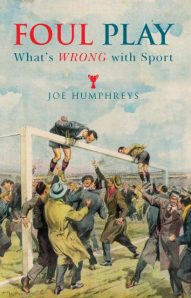 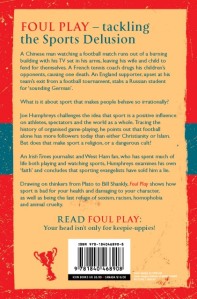 ‘An anecdote at the end, about rodeo cowboys faced with the cruelty of their sport, suggests there is hope. Read it,’ James Mitchell, The Star, Johannesburg

‘Humphreys isn’t just content to list the multitude of sins perpetrated by sport, but is happy to take a controversial line on doping and steroids (ach, what’s the harm?) and to insist that watching sport rots the brain.’ Brian Donaldson, The List

‘an entertaining work audaciously subtitled What’s Wrong With Sport… Humphreys has landed himself with the task of explaining why sport is bad for us, and he has worked very hard at it.’ Andrew Baker, Sports Feature Writer, Telegraph.

‘Joe Humphreys is mad as hell and he’s not going to take it any more, and has written a shibboleth-busting polemic to prove it. No opportunity is overlooked not only to debunk popular assumptions about the social and personal utility of sport but to expose the various hypocrisies and inconsistencies of the major sports’ governing bodies… Foul Play will be generate arguments that last well beyond half time.’ George O’Brien, editor of Playing the Field: Irish Writers on Sport, in a review for The Irish Times

‘It’s rare to find a book that makes you think about sport as a whole and not one small, easily-contained corner of it. You won’t agree with a good 40 per cent of what’s in here but that would be a terrible reason not to read it.’ Malachy Clerkin, The Sunday Tribune

‘The author… rightly concludes that sport is one of the least self-critical areas of modern life. Written from the perspective of a knowledgeable fan… this book will certainly shake some long-held beliefs.’ James Copnall, Times Literary Review

The Story of Virtue: Universal Lessons on How to Live

“Very timely… I really think it’s such an important book to write… Why, when we grow up, do we not know each other’s foundation stories?” – President of Ireland, Mary McAleese

“This is popular ethics at its best. While it is accessible, it is clearly the fruit of great scholarship. It is a welcome addition to the canon of Irish literature on the subject and deserves a wide readership.” – The Irish Book Review

“Humphreys is extraordinarily widely read, and uses his skills as a journalist to put over complex philosophical points with admirable clarity and vigour… This an extraordinarily impressive first book about an extremely difficult subject.” – Andy Pollak, in a review for The Irish Times